Why is Spotify Wrapped so darn good?

Kimberley Killender
It’s the most wonderful time of the year: Spotify Wrapped season. We woke up this morning to the exciting present of our own listening habits, neatly wrapped and presented back to us in a series of pretty, personalised slides. Once you’ve finished taking in your year in review and posting the good bits to your Insta story, read on to see why we’re so obsessed with seeing and sharing the yearly wrap up of our musical data. Not familiar with Spotify Wrapped? No drama, here’s the lowdown: once a year, music streaming platform Spotify provides listeners with a presentation of insights about their own music listening habits. Whilst Spotify Wrapped won’t tell you what kind of bread you are à la Buzzfeed quiz, or recommend careers based on your results like MBTI, it still offers a personalised reflection of your behaviour.

From the embarrassing appearance of a guilty pleasure, to having your ‘most played’ list accidentally dominated by Oscillating Fan White Noise thanks to your nightly listening, we love the story that Spotify tells us about ourselves. Or we don’t. Which is exactly what happened in 2018, when Spotify’s Twitter account was inundated by angry users convinced that their yearly chart toppers were incorrect.

Listener in the mirror.

Our taste in music is an intrinsic part of our identities, but no one wants to be the person trying to force their playlists into conversations. It’s the modern day “guy at the party playing Wonderwall on a guitar”.

Spotify Wrapped evolves more every year, letting us examine our self-image in an increasingly personalised way. These changes ensure Wrapped is always providing more than expected, whilst remaining relevant and reflecting the zeitgeist every year.

In 2018, they provided zodiac-based insights, with their global creative director identifying a cultural shift towards astrology culture. In 2019, they included your most played songs not just of the year, but of the decade. In 2020, they included interactive quizzes, letting people guess who their top artist or song would be before the big reveal. For 2021, they offered an Audio Aura; a combination of colours based on your listening habits that gave visual identity to your ‘vibe’. And in 2022, they’re straight up telling us who we are with a personal, sharable, and comparable MBTI profile style ‘listening personality’. 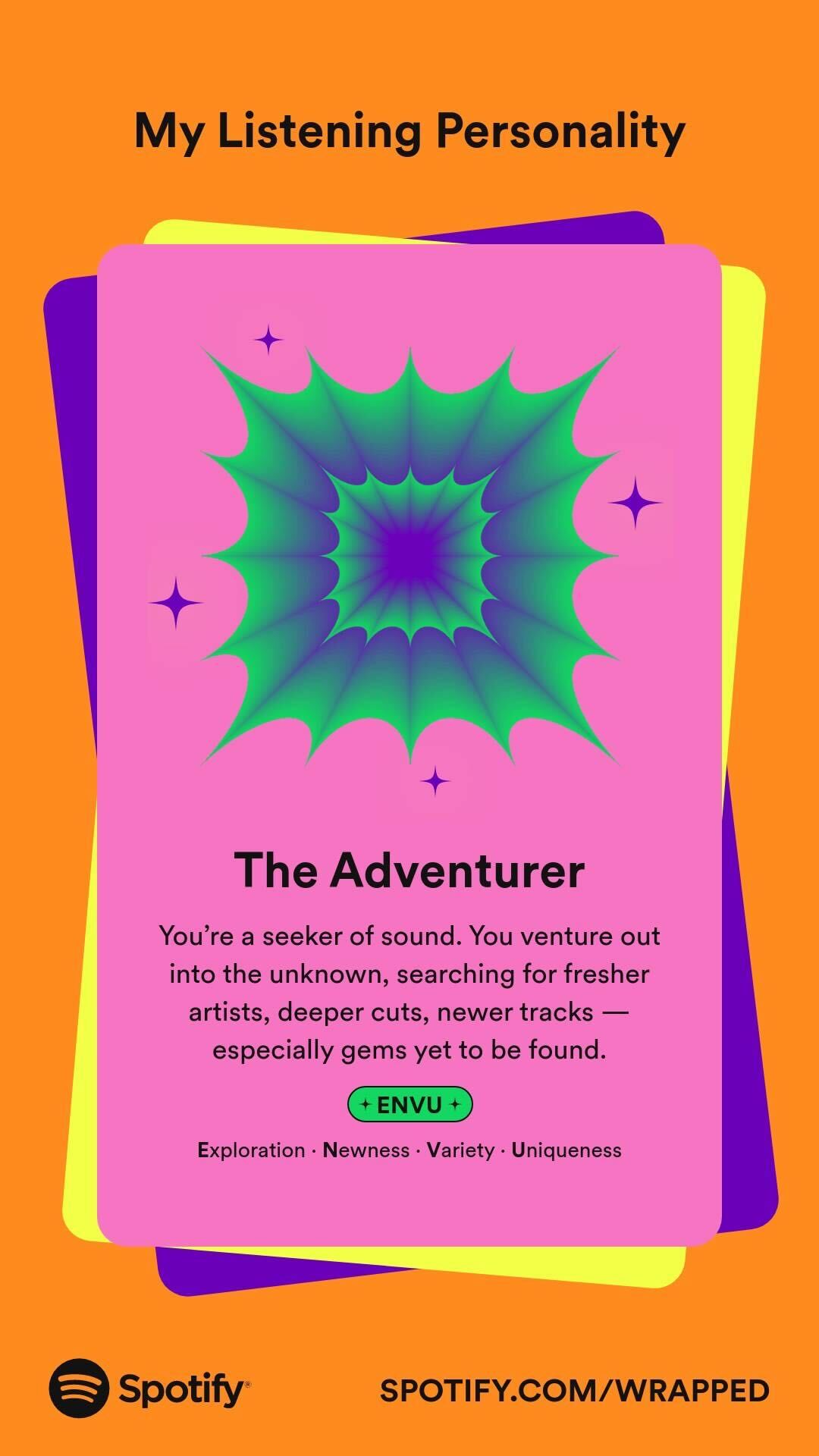 As Spotify Wrapped continues to grow, it no longer just provides you the data in a shareable, aesthetic way, but identifies the ways in which music forms our self-image and feeds that image back to us.

Publicly dancing on my own.

We live in a world of performative social media. It’s ingrained in us to share things that previously we may have kept private, and to want a glimpse into people’s lives behind the curtain.

Whilst Spotify Wrapped has become somewhat of a cultural event, and Instagram Stories will predictably be flooded one day a year with everyone’s musical data, Wrapped is first and foremost made for you to personally enjoy. The choice to share all or part of it is fully in your control.

Spotify Wrapped is a no-risk way to share a heavily-controlled insight into your life, and show people the parts of your Spotify Wrapped that align with how you see your public image. It functions as a self-celebration, and a way to connect, share, and learn about each other, without feeling invasive or requiring public vulnerability. Guilty pleasures and quirky underground favourites are all laid bare in your yearly wrap up, but if having the Hamilton cast as your most played artist doesn’t match the kind of image you want to put out, your secret is safe with Spotify.

Hip to be unique.

The way Spotify presents your data makes it clear that you’re special. It’s designed to make you feel unique and important. One feature that points out you were in the top X% of listeners functions as an ego stroke, and is information you would not have access to without Spotify providing it. For megafans of artists, like Taylor Swift’s army of Swifties, it’s a badge of honour. It’s a way to prove that you really are one of their biggest fans.

Hitting the top percentage of your favourite artists’ listeners feels like you’re a step closer to them than other fans. If we continue to use Taylor Swift as an example, with 83 million listeners, being in the top 5% means you’re one of over 4 million people celebrating that top 5% victory. Spotify Wrapped is designed in a way where your individuality is celebrated and shown off, whilst not actively acknowledging the size of the consumer data pool you’re part of. It’s a clever tactic, positioning people as ‘top 5%’ rather than ‘top 4 million’, and a testament to how strategic copy can help achieve that personal, intimate feeling that encourages loyalty. 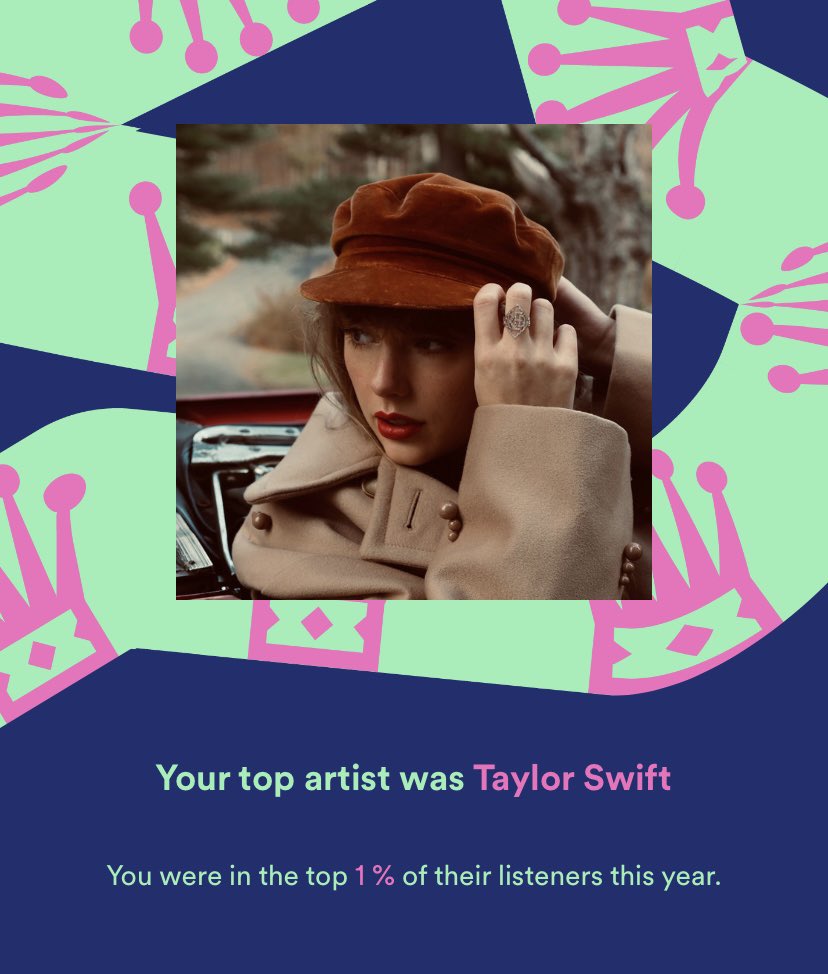 I’ll be watching you. Consensually.

Wrapped shows an impressive display of consumer trust at a time when our faith in tech companies is historically low. After all, to assemble your Spotify Wrapped, the platform requires detailed information about everything you do, stream, listen to, enjoy, skip, and share whilst on their app. We can’t imagine anyone responding with much enthusiasm if Facebook, Twitter, or Google started sending out annual summaries of everything they’ve got on us.

Benjamin Johnson, an advertising professor at the University of Florida, researches the ways we selectively share our music taste to influence self-presentation. He says that Spotify has avoided the “creepiness factor” by giving users the maximum amount of control over what their networks can see about their listening history. Johnson believes that, as a result of this, a person reviewing their Wrapped results “feels the control in that moment before they take the screenshot, where they can decide, Is this going to make me look good? or Does this reflect the story that I want to tell about myself?”

Spotify only uses data you know you’re willingly giving them. It’s not a shock to anyone that your music platform of choice knows the song you’ve listened to most. The end-of-year package is full of low-stakes personal data that we would willingly share if asked.

That don’t impress me much.

Every streaming platform has access to similar data, so why has no one else managed to harness the power of personalising insights?

It works so well for Spotify, why doesn’t Netflix do a packaged presentation of how many hours we spent bingeing Bridgerton this year? Because it’s cooler to listen to hundreds of hours of music than it is to watch hundreds of hours of television. There’s still a slight stigma attached to excessive TV watching. It’s seen as lazy, unproductive, even brain-rotting. Comparatively, listening to music can be done whilst you work, exercise, clean, or socialise, making it more acceptable to share that you listened to Beyonce’s new album 20 times than to admit you watched all nine seasons of The Office twice this year. (We did both.)

Theoretically, this means that other music platforms should be able to make the magic happen, but none of them have. Spotify has a monopoly on music streaming, with 433 million active users worldwide. Its closest competitor, Apple Music, has 88 million active users. Apple Music actually do have their own version of Wrapped, named Replay. It’s available year round, resetting in February, and updates weekly to show your most played songs, artists, and albums.

There’s a reason you don’t see Apple Music users sharing their Replay all over their Instagram stories—and why if you did, you probably wouldn’t care. Visually, it’s nowhere near as shareable as Spotify Wrapped. And because it’s an always-on offering, there’s nothing special or momentous about it for users. It lacks the significance of an event, with no element of surprise, nostalgia, or warm fuzzy feelings as you look back on your year. It simply lists the most basic insights, and builds you a suggested playlist—something Spotify also does year-round.

Let’s wrap it up.

So why is Spotify Wrapped so darn good? Because it’s the digital equivalent of stepping into a psychic’s parlour. Spotify takes the tea leaves of our listening habits and shows us our perceived true self, represented in the songs we loved, artists we obsessed over, and podcasts that kept us company. We love it for the same reason we love personality tests, palm readings, or when someone mentions they’ve noticed a quirky but loveable habit of ours. It’s an insight into how we present, and who we might be.

Looking to press play on a new brand, or change your tune? We’d be Wrapped to help.